Gemstones are some of nature’s most extraordinary treasures and are truly the heart and soul of Anpé designs.

All of our gemstones come from a single trusted supplier with whom we are in contact with daily – as we are always on the hunt for new gems and when creating customized designs, sourcing the perfect gemstone is an important part of the process.

Our gem trading partner is located in Sri Lanka. The gemstones are sourced mainly from Sri Lanka and Madagascar from mines owned by our very close collaborator. In this way we ensure that the gemstones are ethically mined and under good conditions for the people working there.

Here is a list of the gemstones we use:

Sapphire is an Anpé favorite and for great reason. Sapphires are commonly thought to only come in the color blue, however this is not the case. These unique stones come in every tone and color known, and unknown, to man. From deep blues and pastel pinks to cerulean teals and canary yellows, a sapphire’s color is truly one of a kind.

Unlike diamonds, a sapphire’s color is one of the most important aspects in determining its value. The color should have a good hue, tone, saturation and overall coverage in order to have a high value.

Sapphires are great for everyday wear as they rank at a 9 on the Mohs Scale of Hardness, just below diamond.

Some incredible types of sapphires include:

Padparadscha: One of the rarer sapphires is a pinkish orange variety called padparadscha, a name that comes from the Sinhalese word for lotus flower. Traditionally from Sri Lanka, these gemstones are sifted from Sri Lankan rivers.

Color Changing: A color changing sapphire is a stone that changes from one color to another depending on the light source, which makes them rare and therefore more expensive. They exhibit different colors in different lighting conditions, giving you two very exciting colors under the right conditions.

Bi-Color: Bi-color sapphires are stones that harbour two different colors as a result of color zoning. Color zoning happens when conditions of the trace elements which color the stone change, making the stone incredibly unique and rare.

Blue Kashmir Sapphires: Blue Kashmir sapphires are found in the Kashmir region and are one of the rarest and most expensive sapphires in the world. No other Kashmir sapphires have been found since the discovery of a second mine in 1880’s. This means that all Kashmir sapphire available today comes from only two mines. These stones boast a luxurious velvet blue color and are normally of incredible quality.

Diamond is the only gemstone composed of a single element: carbon. It is the hardest out of all other gems which makes it great for everyday wear. One of the major differences between diamonds and colored gemstones is that diamonds are prized for being colorless, whereas other gemstones are prized for their vibrant hues and tones. This highly refractive and sparkly stone is one of the most commonly used gems in fine jewellery, however not here. Whilst we have a small collection of designs, called the Diamond Series, colorful gems take the center stage in most of our designs, with diamonds being the perfect adornment instead.

Tsavorite is a rare member of the garnet family and a new member to the jewellery market, as it was first discovered in 1967. This species of gemstone can be found in Tanzania, Kenya and Madagascar, although the very finest Tsavorite, with the purest green hues, is found in Tsavo, Kenya.

Tsavorites are a fantastic alternative to emeralds, as they harbor less inclusions and have a much higher brilliance (sparkle) and fire (color). Although emerald and tsavorite have a similar hardness rating on the Mohs Scale, tsavorite are far less susceptible to chipping and scratching as they are less included than emeralds.

Have a look at this stunning Harita ring, which holds a 2.19ct. Tsavorite.

Tourmaline was first discovered in the 1600’s. The name comes from the Sinhalese term “turmali,” which means stone of many colors.

Similar to sapphires, tourmalines come in a vast array of colors, with pink being one of the rarest hues. When a tourmaline has green on the outside and pink on the inside, it is known as a watermelon tourmaline.

Until the 1800’s, tourmalines were commonly mistaken for emeralds and rubies, as these stones have very similar colors to each other. It is said that many of the gems in the Russian Crown from the 17th century are tourmalines, but were thought to be rubies.

Have a look at the beautiful Varnaya Rosa ring, which holds a 1.92ct. bi-color tourmaline gem.

Spinels can be found in a number of countries including Afghanistan, Brazil, Cambodia, Kenya, Russia, Tanzania, Thailand and Vietnam, however it is mostly mined in Sri Lanka and Burma. Just like sapphires and tourmalines, spinels can be found in a large assortment of colors, ranging from colorless to black including brown, blue, dark green, violet, pink, lavender and red.

Similar to tourmalines, spinels used to be mistaken for rubies. So much so, that the Black Prince’s Ruby, a centerpiece of the British Imperial State Crown, was only recently confirmed to be a spinel. Spinels tend to be more reflective and glittering than rubies, because of their different optical characteristics.

In 2016, Jewelers of America removed sardonyx as the second birthstone of August and replaced it with the beautiful gem spinel.

Red spinels, also known as ruby spinels, are the most prized of this mineral. The opaque, black variety, known as Pleonast, has a good luster and is used as a black gemstone.

We do not commonly use emerald at Anpé Atelier, as these gems are highly included which makes them prone to chipping and scratching. We recommend tsavorite as an alternative.
The first known emeralds were mined in Egypt around 1500 BC, and it was said to be one of Cleopatra’s favorite stones out of her vast jewelry and gem collection.

These beautiful stones have a hardness of 7.5 to 8 on the Mohs Scale, however they are more susceptible to chipping or scratching than other stones with a similar rating, as they generally have more inclusions. This means that you have to be very careful when wearing your emerald jewelry.

Most emeralds are usually treated by filling the emerald with oil to fill in the cracks and help prevent unintentional chipping or cracking. You can coat emeralds with baby oil as an extra precaution to help the stone from becoming overly brittle.
Many emeralds will have some type of internal inclusion, usually quite visible to the naked eye. Naturally internally flawless emeralds are incredibly rare and can be worth quite a bit of money, sometimes even more than a diamond!
Just like sapphires, the emerald’s most important quality is its color. The ideal color is vivid green to bluish green, with even color saturation and no color zoning.

Aquamarine is known for its beautiful, crystal blue color. It gets its name from Latin “aqua marina” which means “sea water.” It references the similarity of the gemstone’s color and clarity to that of the ocean.

Decorative jewelry and protective amulets using aquamarine have been found that date back as far as 500 B.C. Believed to be a precious treasure from mermaids, sailors have worn aquamarine amulets to keep them safe at sea and ward off seasickness.

Aquamarine is mined in many countries across the world, including Brazil, Zambia, Nigeria, and Madagascar, as well as Pakistan and Mozambique. Many of the gem-quality examples of aquamarine are mined in Brazil, and these are the stones commonly used in jewelry.

Both emeralds and aquamarine are members of the beryl variety of gemstones, and many people are unaware that these stones are so closely related. Emeralds are the rarest and precious of the beryl gemstones because they are more fragile, however, fine examples of aquamarine are also highly prized.

Tanzanite is a trade name that was first used by Tiffany and Company for gem-quality specimens of a  mineral named zoisite with a blue color. Tiffany could have sold the material under the mineralogical name of “blue zoisite,” but they thought the name “tanzanite” would stimulate customer interest and be easier to market.

The name “tanzanite” was given because the world’s only known tanzanite deposit of commercial importance is in northern Tanzania. The name reflects the gem’s limited geographic origin.

This stone was only recently found in the 1960’s and has grown quickly in popularity due to its beautiful blue color.

Tanzanite comes from the mineral zoisite, which naturally occurs in a wide range of colors that include colorless, gray, yellow, brown, pink, green, blue, and violet. The name “tanzanite” is used for a color variety of zoisite that ranges from blue, through violet, to violetish purple.

Tanzanite has a rating of 6.5 on the Mohs Hardness Scale, making it one of the “softer” gemstones. This means that the gem is more vulnerable to being scratched during normal wear. This problem can be reduced if the setting is designed to protect the stone from impact and abrasion, or if the ring is not worn during activities when the chance of impact or abrasion is high. 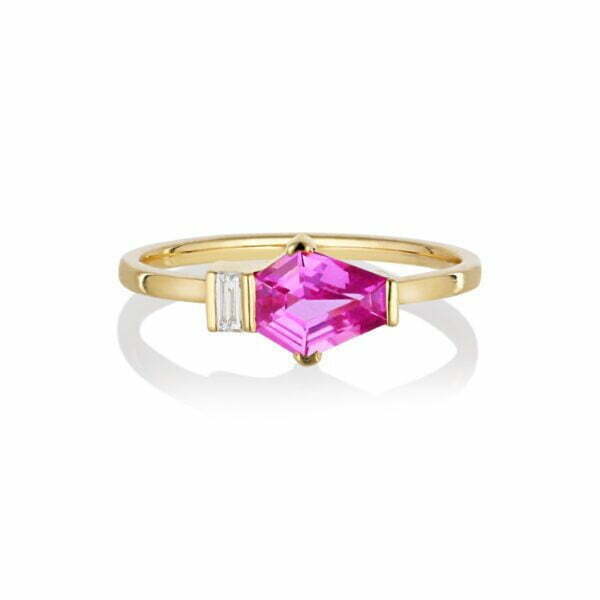 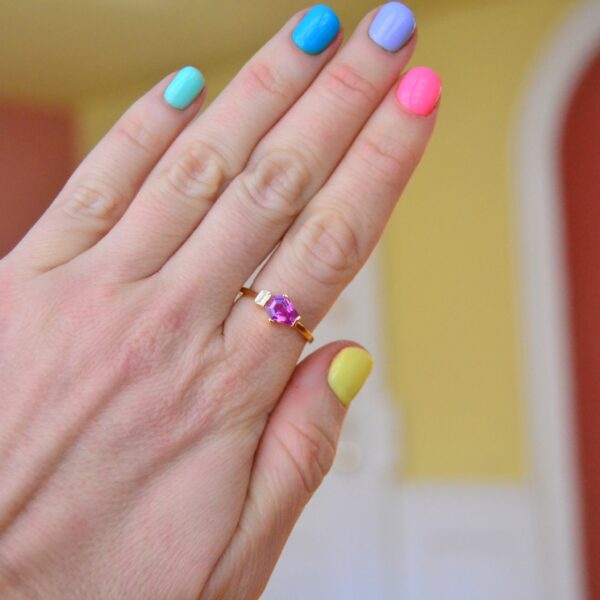 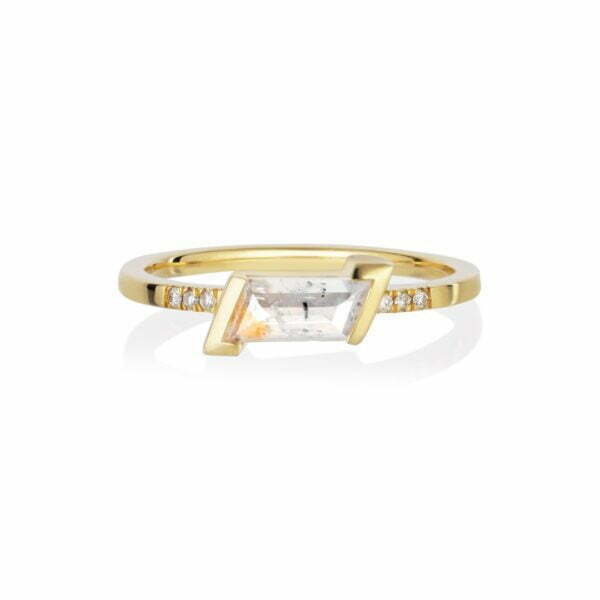 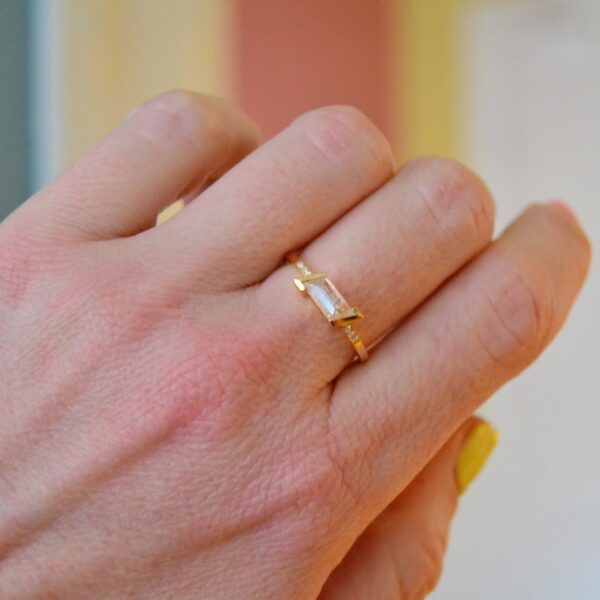 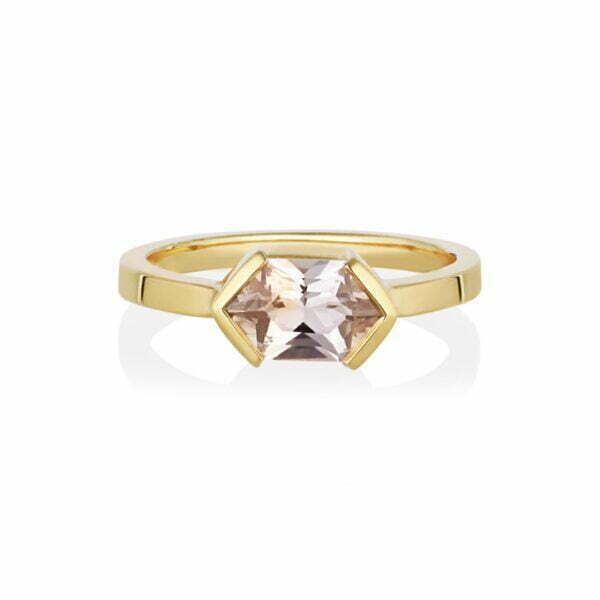 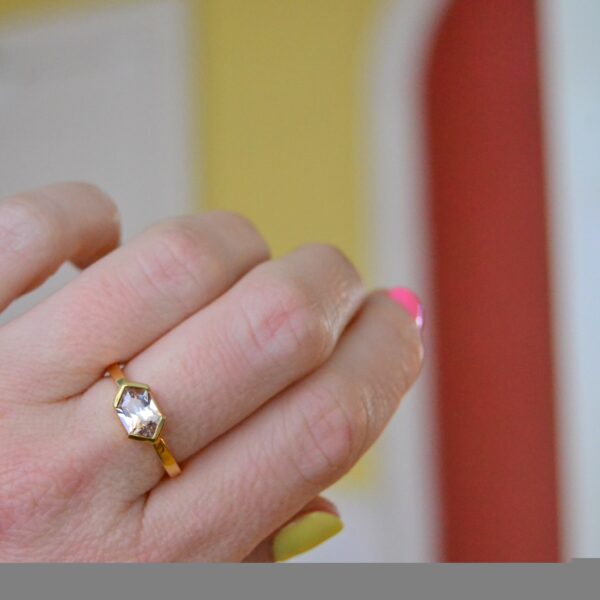 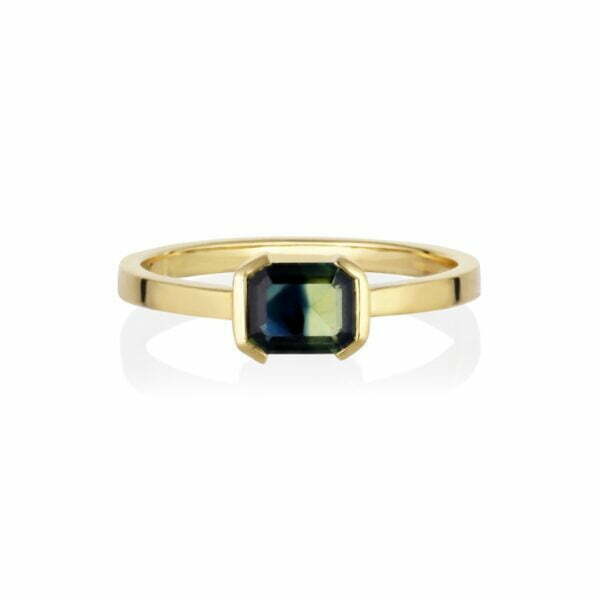 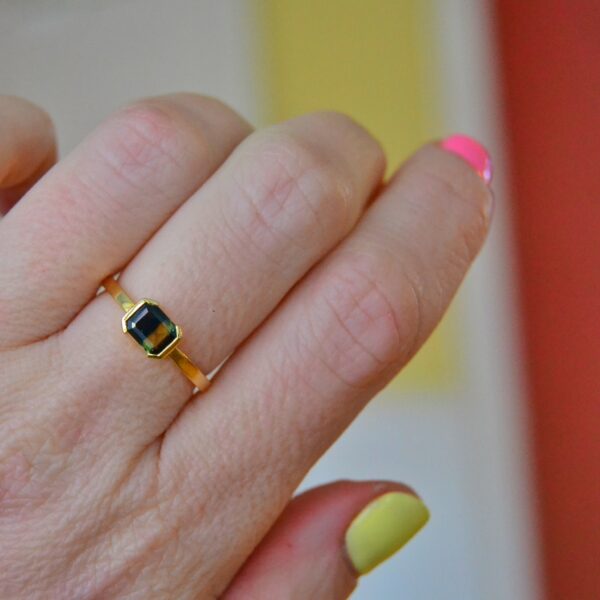 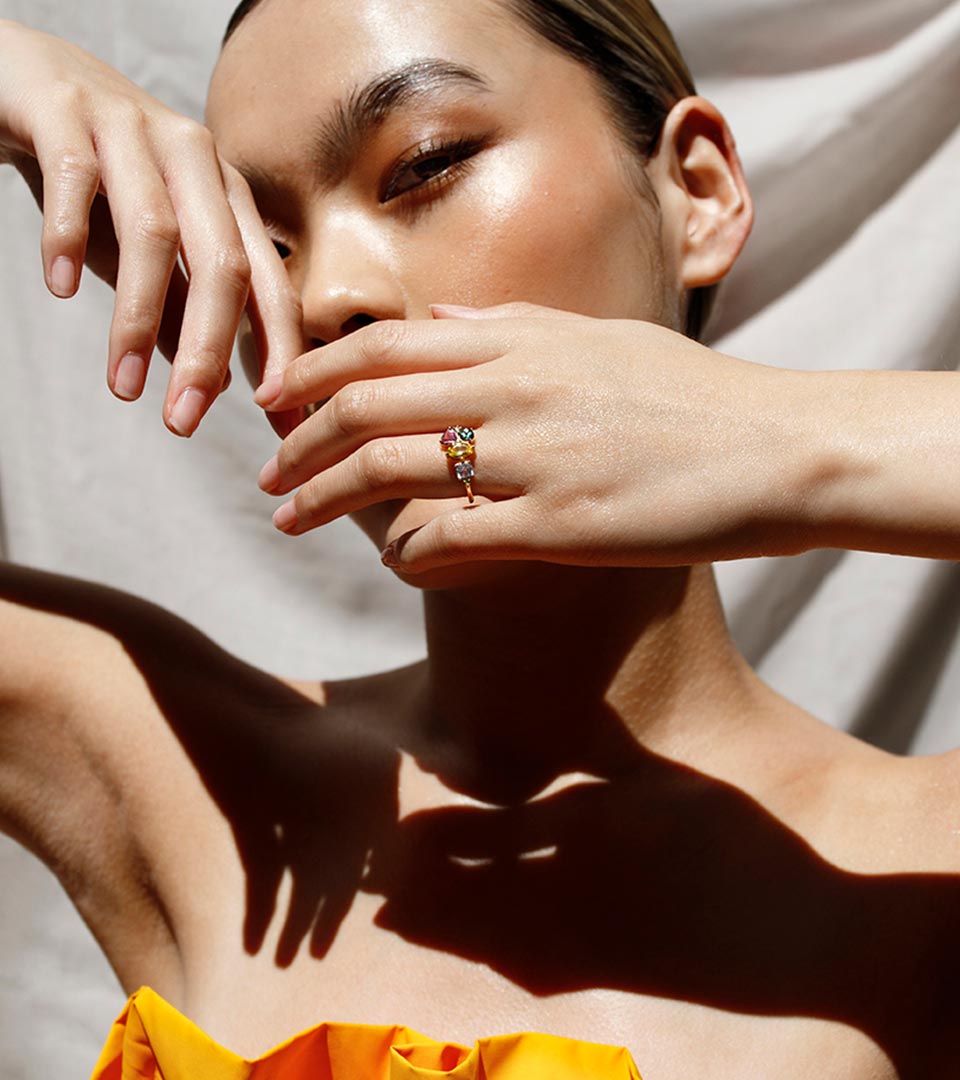 No items in the basket.